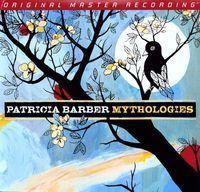 Mastered by Paul Stubbleline from the orginal Mastertape at MFSL

A singular jazz work, Patricia Barber’s groundbreaking Mythologies is the result of the pianist becoming the only singer-songwriter to ever win a Guggenheim Fellowship. Allowed the time to craft a sophisticated album, the ambitious 2006 set is without peer in any musical genre.

A cycle based on Greek mythology and Ovid’s “Metamorphoses,” Mythologies brings each of the eleven characters from Ovid’s play to life in song. Accompanied by guitarist Michael Alger, bassist Michael Arnapol, and drummer Eric Montzka, and assisted by a few special guest background vocalists--including a children's choir--Barber has turned in one of the first legitimate masterworks of the new century.

Lyrically addressing lovestruck emotions, insomnia, desires, risks, and more, Barber habitually turns conventions on their head. She matches her sonnets, double entendres, and fascinating narratives with music that’s at once seductive, sad, beautiful, and powerful. Intended to be listened to from start to finish, Mythologies comes off as a sonic cycle that traces life and death in an engrossingly imaginative fashion that’s on par with the classic Greek influences.

Vocal jazz records don’t get better than this!

Don’t settle for the standard CD version, which is robbed of much of the presence, richness, and atmosphere.

"(a) dark sense of humor mingling with a bright musicality." - downbeat
"Barber, for my money the single most interesting female American jazz singer on the contemporary scene, has remained an uncompromisingly brilliant innovator." - jazztimes
Mythologies is a single moment in jazz when the entire music moves forward because it engages the culture as it is. Blues and swing are embedded in these complex, ever-shifting harmonics and melodic songs; they shape-shift through pop, balladry, rock, post-bop, and even hip-hop. They stand on their own in the full poetic view of the written and sung word. Indeed, as a whole they become something wonderfully new, generated from the meat, bone, and sinew of the past as it enters the here and now. Mythologies is Barber's masterpiece -- thus far. - Allmusic
Features: • Half-Speed Production and Mastering by Mobile Fidelity Sound Lab • Specially Plated and Pressed on 180 grams of High Definition Vinyl • Special Static Free - Dust Free Inner Sleeve • Heavy Duty Protective Packaging • Mastered from the Original Master Tapes
Patricia Barber Mythologies Track Listing:
1. The Moon
2. Morpheus
3. Pygmalion
4. Hunger
5. Icarus (for Nina Simone)
6. Orpheus/ Sonnet
7. Persephone
8. Narcissus
9. Whiteworld/ Oedipus
10. Phaethon
11. The Hours 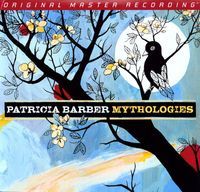