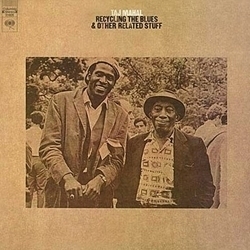 "ORG knows how to pick 'em. Recycling contains inspired performances matched with impressive sonics on every side. The live cuts do a fine job of capturing the timbre of the instruments and the energy of the concert... crisp and remarkably realistic sound." - Jeff Wilson, The Absolute Sound,

ORG Recordings Group re-mastered 45 rpm vinyl is superior to most digital reproductions. Pressed at RTI and mastered by Bernie Grundman from the original analogue master tapes, every nuanced detail, including the rarely used kalimba is pristinely clear. The tones of the steel guitar are rich in texture. Audiophiles and Taj Mahal enthusiasts will want to add Recycling The Blues & Other Related Stuff to their collections.-AudiophileAudion Review

1972's Recycling The Blues & Other Related Stuff is the fifth full-length album from American blues singer/songwriter Taj Mahal. The self-produced Columbia Records 11-song set features seven live tracks and four studio recordings. The first seven tracks were recorded live at the Fillmore West while the remainder were recorded at Columbia's San Francisco studios with vocals  from the one-and-only Pointer Sisters. The appropriately titled collection finds Taj Mahal in excellent form and doing what he does best, reinterpreting the blues as only he can.

When Taj Mahal burst on the scene in the late sixties, it was difficult to classify his music. Playing guitar and harmonica, he fit the bill as a traditional blues artist. Folk enthusiasts appreciated his banjo work as well. He collaborated with a variety of artists, including rock musicians (Ry Cooder). With creative vision, he developed a unique blues mystique. His stage presence led him to, folk and blues festivals, national rock venues and clubs around the world.

His 1972 studio/live album, Recycling The Blues & Other Related Stuff has now been reissued on 45 rpm vinyl. This is an unusual recording with 11 tracks that clock in just shy of thirty-eight minutes. The first seven tracks are live, recorded at the Fillmore West in San Francisco. Side A opens with a “Taj” oddity…a conch solo! Known for experimenting with unusual instruments, the next cut is unexpected. Performing on kalimba (African thumb piano), he manages to extract a rhythmic flow from this “tinny” instrument, as the crowd responds enthusiastically. Switching to his trademark National steel guitar, Taj explodes with forceful strumming and an earthy, baritone voice on “Bound To Love Me Some”. As a solo performer, he has few peers in the totality of his delivery. The set becomes more innovative as the bluesman unveils a banjo for an instrumental, “Ricochet”. With indelible technique, a riveting progression of chord and individual notation transforms bluegrass into modern expression.
Side B starts with a solo a capella gospel song (“A Free Song/Rise Up Children Shake The Devil Out Of Your Soul”). Then, it’s vintage Taj Mahal as he delivers “Corinna” with his raspy vocal style. Without losing the idiosyncratic ambiance, a duet with tuba player Howard Johnson (“Cakewalk Into Town” is an appealing transition to studio material. Side C is some of his best work. Backed by the “unknown” (at the time, anyway) Pointer Sisters, Taj reinvents Robert Johnson’s “Sweet Home Chicago” and makes it his own. The gospel-laden backup vocals are exultant. The Pointers resonate like soulful Andrews Sisters with their three-part harmonies on “Texas Woman Blues”.  The album concludes with a virtuosic solo guitar instrumental, “Gitano Negro”. Easily the longest cut on the album (eight and a half minutes), Taj alternates pensive, delicate phrasing with cadenced strumming. There is an underlying classical structure that coalesces with the up tempo riffs.
Musicians:
Taj Mahal, steel-bodied guitar, kalimba, banjo, conch, hand claps, upright bass
Howard Johnson, hand claps, tuba
The Pointer Sisters, background vocals
1.  Conch Intro